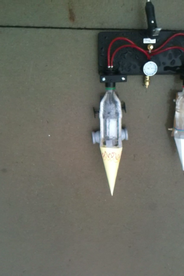 For this water bottle car, I made sure that it had 4 wheels, 1 cardboard, a bottle, 2 straws, and a cone. We kind of ran out of time so couldn't put the wheels on properly. From this, I saw that you need to put time and put the bottle parts on properly. Also, when we were ready to launch, we kept on experimenting with different amount of water for the car since we didn't know how much water was the perfect amount to make the bottle go the furthest. 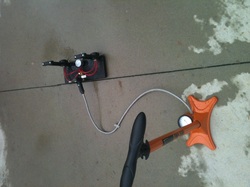 I learned that in order to know how to make the water bottle car go faster, we need to know science. For the water bottle car, the 3 laws of Newton are the greatest influences. Also, the wheels are extremely important in the car since it stops fast if the wheels are not correctly on. Also, I learned that there is a certain amount of water that will make the car go faster. If there is too much water, there will be too much weight and will not go far. However, if there is too little water, then that won't work either. The best amount we figured out was a bit less than half the bottle.
When we made the water bottle car, we only used a cardboard box for the bottom. Then, we used straws and a bottle. So, we glued the bottle and the cardboard, and put two straws underneath so the axle of the wheels could roll easily. Also, we had a cone on the bottom of the bottle taped up.

1st Law of Newton <Inertia>
First of all, let's know about the definition of Inertia. Inertia means a property of matter by which it remains at rest or in uniform motion in the same straight line unless acted upon by some external force. It will be hard to understand by just this dictionary definition, so I'll explain in more detail about it. The main two fact you have to know about inertia is:
-All objects are still until you put force on them.
-All objects keep on moving in one direction until another force gets in the way.
So, just think that all the objects on earth are lazy. You have to put force on them to make them move or stop. Then, why does objects stop by themselves sooner or later? Well, there are a lot of reasons for this, but the main reason is friction. So, we put this science in our water bottle car. Since the friction will try to make the car stop, we tried to make this lesson and used wheels that would roll smoothly.

3rd Law of Newton <Action/ Reaction>
The 3rd law is about the reaction that come after an action. Everything reacts after something. As the biggest example, there is rowing the boat. As you push the water with the row, the water pushed back and you go forward. Also, if you stab your toe in the corner, the table hits back at your toe so your toe hurts a lot. This is why you get hurt by crashing into something.
Now, water bottle cars are pressurized and blasted off. So, we of course needed to lessen the friction as much as possible. So, we put a cone on the bottle bottom. Also, we tried to build a sturdy pair of wheels so that the bottle could roll more fluently even with the weight of the water.

Fluid Friction
Fluid friction is the friction that happens when the air particles cause friction and slows down the movement of an object. This happens more if a surface is flat and larger. So, a way we tried to prevent fluid friction was to put a cone on the bottom of the bottle. This way, the small point of the cone cuts through the air and decreases the friction.

Rolling Friction
The wheels are influenced by the rolling friction and is slowed down. So, in order to decrease this friciton, we tried to get a smooth and round wheel. What we used were 4 milk bottle caps. All of these bottle caps were the same size and were smooth, so it was perfect for reducing the rolling friction.

Sliding Friction
For sliding friction, the wheels slide through the ground but there still is friction that slows down, and eventually stops the moving object. Something we did to prevent the sliding friction was to make the wheels free so it can roll fluently. A way we did this was to put the axis of the wheels in a bigger straw. This way, the wheels could roll freely even in a limited space.